Acorus calamus (also called sweet flag or calamus, among many common names) is a species of flowering plant, a tall wetland monocot of the family Acoraceae, in the genus Acorus. Although used in traditional medicine over centuries to treat digestive disorders and pain, there is no clinical evidence for its safety or efficacy – and ingested calamus may be toxic – leading to its commercial ban in the United States. 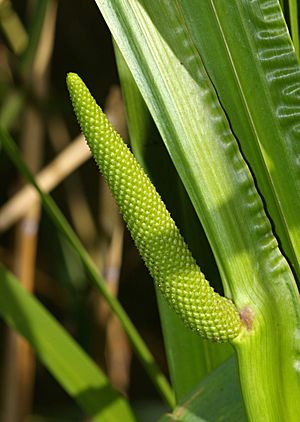 Sweet flag is a herbaceous perennial, 2 m (79 in) tall. Its leaves resembles those of the iris family. Sweet flag consists of tufts of basal leaves that rise from a spreading rhizome. The leaves are erect yellowish-brown, radical, with pink sheathing at their bases, sword-shaped, flat and narrow, tapering into a long, acute point, and have parallel veins. The leaves have smooth edges, which can be wavy or crimped. The sweet flag can be distinguished from iris and other similar plants by the crimped edges of the leaves, the fragrant odor it emits when crushed, and the presence of a spadix.

Only plants that grow in water bear flowers. The solid, triangular flower-stems rise from the axils of the outer leaves. A semi-erect spadix emerges from one side of the flower stem. The spadix is solid, cylindrical, tapers at each end, and is 5 to 10 cm in length. A covering spathe, as is usual with Araceae, is absent. The spadix is densely crowded with tiny greenish-yellow flowers. Each flower contains six petals and stamens enclosed in a perianth with six divisions, surrounding a three-celled, oblong ovary with a sessile stigma. The flowers are sweetly fragrant. In Europe, it flowers for about a month in late spring or early summer, but does not bear fruit. The fruit is a berry filled with mucus, which when ripe falls into the water and disperses by floating. In Asia, it also fruits sparingly, and propagates itself mainly by growth of its rhizome, forming colonies.

The branched, cylindrical, knobby rhizome is the thickness of a human finger and has numerous coarse fibrous roots below it. The exterior is brown and the interior white.

The generic name is the Latin word acorus, which is derived from the Greek άχόρου (áchórou) of Dioscorides (note different versions of the text have different spellings). The word άχόρου itself is thought to have been derived from the word κόρη (kóri), which means pupil (of an eye), because of the juice from the root of the plant being used as a remedy in diseases of the eye ('darkening of the pupil').

The specific name calamus is derived from Greek κάλαμος (kálamos, meaning "reed"), cognate to Latin culmus ("stalk") and Old English healm ("straw"), Arabic قَلَم‎‎ (qálam, "pen") and Sanskrit कलम (kalama, "reed used as a pen", in turn from Proto-Indo European *kole-mo- (thought to mean "grass" or "reed"). The name "sweet flag" refers to its sweet scent and its similarity to Iris species, which are commonly known as flags in English since the late fourteenth century.

The plant was already mentioned in the Chester Beatty papyrus VI dating to approximately 1300 BC. The ancient Egyptians rarely mentioned the plant in medicinal contexts, but it was certainly used to make perfumes.

Initially, Europeans confused the identity and medicinal uses of the Acorus calamus of the Romans and Greeks with their native Iris pseudacorus. Thus the Herbarius zu Teutsch, published at Mainz in 1485, describes and includes a woodcut of this iris under the name Acorus. This German book is one of three possible sources for the French Le Grant Herbier, written in 1486, 1488, 1498 or 1508, of which an English translation was published as the Grete Herball by Peter Treveris in 1526, all containing the false identification of the Herbarius zu Teutsch. William Turner, writing in 1538, describes 'acorum' as "gladon or a flag, a yelowe floure delyce".

The plant was introduced to Britain in the late 16th century. By at least 1596, true Acorus calamus was grown in Britain, as it is listed in The Catalogue, a list of plants John Gerard grew in his garden at Holborn. Gerard notes "It prospereth exceeding well in my garden, but as yet beareth neither flowers nor stalke". Gerard lists the Latin name as Acorus verus, but it is evident there was still doubt about its veracity: in his 1597 herbal he lists the English common name as 'bastard calamus'. Carl O. Sauer reported the tuber to have been used by North American Indians at the time of European discovery.

According to some interpretations, American poet Walt Whitman used the calamus plant to represent homoerotic love. 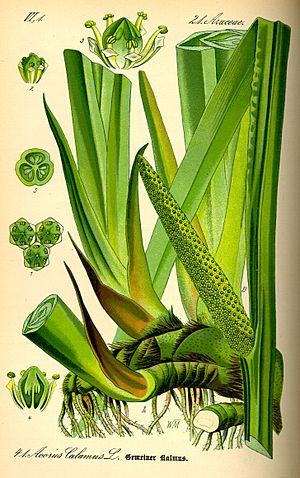 Illustration from an 1885 flora by Walther Otto Müller

There are three cytotypic forms distinguished by chromosome number: a diploid form (2n=24), an infertile triploid form (2n=36), and a tetraploid form (see below). The triploid form is the most common and is thought to have arisen relatively recently in the Himalayan region through hybridisation of the diploid with the tetraploid.

Probably indigenous to most of Asia, the triploid form Acorus calamus var. calamus (also known as var. vulgaris or var. verus) has now been introduced across Europe, Australia, New Guinea, South Africa, Réunion and North America. The tetraploid form Acorus calamus var. angustatus is native throughout Asia, from India to Japan and the Philippines and from Indonesia to Siberia. The diploid form Acorus americanus or Acorus calamus var. americanus is found in northern subarctic North America and scattered disjunct areas throughout the Mississippi Valley, and furthermore diploids are also found in Mongolia, central Siberia (Buryatia), Gilgit–Baltistan in Pakistan (claimed by India) and northern Himachal Pradesh in India. It is extinct in some parts of the United States and Canada. It may not been native to some of these areas, Pre-Columbian populations are thought to have dispersed it across parts of the United States.

Currently the taxonomic position of these forms is contested. The comprehensive taxonomic analysis in the Kew World Checklist of Selected Plant Families from 2002 considers all three forms to be distinct varieties of a single species. The Flora of North America publication considers the diploid form to be a distinct species, analyzing North American forms of the diploid variety, and does not analyse the morphology of Asian forms of the diploid variety. Also, in older literature, the name Acorus americanus may be used indiscriminately for all forms of Acorus calamus occurring in North America, irrespective of cytological diversity (i.e. both the diploid and triploid forms). The treatment in the Flora of China from 2010, which is followed in the Tropicos database system, considers all varieties to be synonyms of a single taxonomically undifferentiated species, pointing to morphological overlap in the characteristics singled out by Thompson.

The primary morphological distinction between the triploid and the North American forms of the diploid is made by the number of prominent leaf veins, the diploid having a single prominent midvein and on both sides of this equally raised secondary veins, the triploid having a single prominent midvein with the secondary veins barely distinct. According to the Flora of China, there is clear overlap in these characteristics and the different cytotypes are impossible to distinguish morphologically. Triploid plants are infertile and show an abortive ovary with a shrivelled appearance. This form will never form fruit (let alone seeds) and can only spread asexually.

The tetraploid variety is usually known as Acorus calamus var. angustatus Besser. A number of synonyms are known, but a number are contested as to which variety they belong. It is morphologically diverse, with some forms having very broad and some narrow leaves. It is furthermore also cytotypically diverse, with an array of different karyotypes.

Calamus leaves and rhizomes contain a volatile oil that gives a characteristic odor and flavor. Major components of the oil are beta-asarone (as much as 75%) and alpha-asarone, saponins, lectins, sesquiterpenoids, lignans, and steroids. Phytochemicals in the plant vary according to geographic location, plant age, climate, species variety, and plant component extracted. Diploids do not contain beta-asarone.

A. calamus and products derived from A. calamus (such as its oil) were banned from use as human food or as a food additive in 1968 by the United States Food and Drug Administration. Although limits on consumption in food or alcoholic beverages (115 micrograms per day) were recommended in a 2001 ruling by the European Commission, the degree of safe exposure remained undefined.

Although calamus has been used for its fragrance and ingested, it has not been studied by rigorous clinical research. Individual medical reports of toxicity mention severe nausea and prolonged vomiting over many hours following oral uses. Laboratory studies of its extracts indicate other forms of toxicity, due mainly to the emetic compound β-asarone.

A. calamus has been an item of trade in many cultures for centuries. It has been used medicinally for a wide variety of ailments, such as gastrointestinal diseases and treating pain, and its aroma makes calamus essential oil valued in the perfume industry. The essence from the rhizome is used as a flavor for foods, alcoholic beverages, and bitters in Europe. It was also once used to make candy.

The young stalks can be pulled when under 30 cm (12 in); the inner stems can be eaten raw. The roots can be washed, peeled, cut into small pieces, boiled, and simmered in syrup to make candy.

Sweet flag has a very long history of medicinal use in Chinese, Nepal and Indian herbal traditions. The leaves, stems, and roots are used in various Siddha and Ayurvedic medicines and by the Sikkim of Northeastern India. Sweet flag is one of the most widely and frequently used herbal medicines among the Chipewyan people.

This plant is sometimes used as a pond plant in horticulture. There is at least one tetraploid ornamental cultivar known; it is usually called 'Variegatus', but the RHS recommends calling it 'Argenteostriatus'.

All content from Kiddle encyclopedia articles (including the article images and facts) can be freely used under Attribution-ShareAlike license, unless stated otherwise. Cite this article:
Acorus calamus Facts for Kids. Kiddle Encyclopedia.