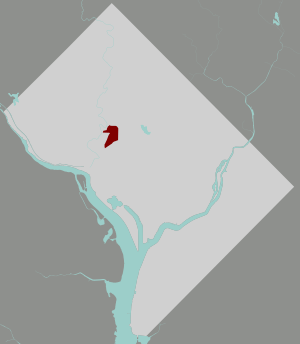 Map of Washington, D.C., with Adams Morgan highlighted in maroon.

Adams Morgan is a culturally diverse neighborhood in Northwest Washington, D.C.. It is centered at the intersection of 18th Street and Columbia Road. Adams Morgan is the center of Washington's Hispanic immigrant community. It is a major night life area with many bars and restaurants, particularly along 18th Street (the primary commercial district) and Columbia Road. Much of the neighborhood has 19th- and early 20th-century row houses and apartment buildings.

The name Adams Morgan was originally hyphenated. It is derived from the names of two, formerly segregated area elementary schools—the older, all-black Thomas P. Morgan Elementary School (now defunct) and the all-white John Quincy Adams Elementary School. Pursuant to the 1954 Bolling v. Sharpe Supreme Court ruling, District schools were desegregated in 1955. The Adams-Morgan Community Council, comprising both Adams and Morgan schools and the neighborhoods they served, was formed in 1958. The city drew boundaries of the neighborhood through three preexisting neighborhoods – Washington Heights, Lanier Heights, and Meridian Hill – naming the resulting area after both schools.

In the late 1960s, a group of residents organized and worked with city officials to plan and construct a new elementary school and recreational complex that was conceived as a community hub, a concept that 40 years later has become a favored one in public school facilities design. The development was named the Marie H. Reed Learning Center after Bishop Reed, a community activist, minister and leader. It featured a daycare center, tennis and basketball courts, a solar-heated swimming pool, health clinic, athletic field and outdoor chess tables. 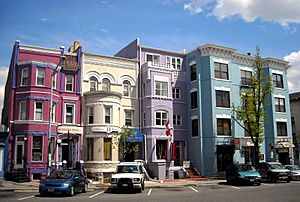 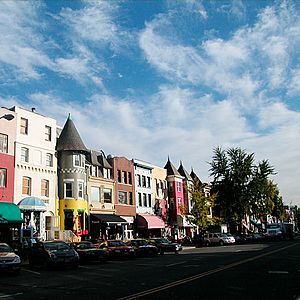 Adams Morgan, together with the nearby Mount Pleasant and Columbia Heights, serve as a gateway community for immigrants. Since the 1960s, the predominant international presence in both communities has been Latino, with the majority of immigrants coming from El Salvador, Guatemala and other Central American countries. Since the early 1970s, like other areas of the nation, Adams Morgan had seen a growing influx of immigrants from Africa, Asia and the Caribbean, as well. Gentrification and the resulting high cost of housing, however, have displaced many immigrants and long-time African American residents, particularly those with young children. Many small businesses have also been displaced. The community still retains a degree of diversity, most evident in its array of international shops and restaurants. Restaurants in Adams Morgan offer ethnic cuisines, among them Spanish, Ethiopian, Guatemalan, Mexican, Italian, Dutch, Vietnamese, Ghanaian, Cajun, Brazilian, Palestinian, Peruvian, Pakistani cuisine, Thai, Lebanese, Somali, and Chinese. 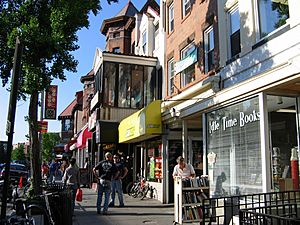 Adams Morgan also has become a thriving spot for night life, with a number of bars and clubs featuring live music. Over 90 establishments possess liquor licenses, putting it on level with other popular nightlife areas like Georgetown and Dupont Circle. Local stores along the 18th Street corridor were rapidly replaced with late-night establishments, leading to a moratorium on new liquor licenses by the Alcohol Beverage Control Board in 2000 after successful lobbying by resident groups. The moratorium was renewed in 2004, but eased to allow new restaurant licenses.

Although many immigrants and African-American residents have left Adams Morgan, the long-time institutions that meet the needs of Latinos and other non English-speaking residents ontinue to serve immigrants and their families. Adams Morgan is home to Mary's Center, a clinic focusing on healthcare delivery to Spanish-speaking patients, and the Latino Economic Development Corporation, as well as numerous businesses and churches that employ and cater to immigrants. Adjacent Mt. Pleasant also hosts a number of commercial enterprises, social service agencies and other institutions that help to anchor local immigrants to the area.

Adams Morgan continues to show linguistic and cultural diversity of its public schools. Many of the families served live beyond the boundaries established for routine student enrollment; however, Adams, Reed, and H.D. Cooke elementary schools all have international populations, with children from well over 30 nations in attendance. Latino and African-American children comprise the majority of students in the public schools, and virtually all are children of color.

The second Sunday of September, the neighborhood hosts the Adams Morgan Day Festival, a multicultural street celebration with live music and food and crafts booths. And, weather permitting, every Saturday—except during the coldest winter months—local growers sell fresh, organically grown produce and herbs; baked and canned goods; cheeses; cold-pressed apple juice and fresh flowers at the farmers market, in operation in the same location for more than 30 years. Also on summer Saturdays, the Western Art Market is open at the Marie Reed School.

In the 1960s, the neighborhood's attractions included the Avignon Freres bakery and restaurant, the Café Don restaurant, the Ontario motion picture theater, and the Showboat Lounge jazz nightclub. In the 1980s, Hazel's featured live blues and jazz. Its soul food offerings made it a favorite of black jazz musicians like Dizzy Gillespie when they came to town.

The area is not directly served by the Metrorail system. The nearest station, Woodley Park-Zoo/Adams Morgan (Red Line) is in the Woodley Park neighborhood, but was renamed in 1999 to reflect the station's proximity to Adams Morgan. The nearest station on the Green Line is Columbia Heights. In March 2009, the Washington Metropolitan Area Transit Authority (WMATA) began operating a DC Circulator bus route connecting the center of Adams Morgan with both Metro stations. The area is also served by a number of WMATA Metrobus lines.

Adams Morgan is in the service area of Advisory Neighborhood Commission 1C. The boundaries of ANC 1C are 16th Street NW on the east, Harvard Street NW and Rock Creek Park on the north, Rock Creek Park and Connecticut Avenue on the west, and Florida Avenue and U Street on the south.

All content from Kiddle encyclopedia articles (including the article images and facts) can be freely used under Attribution-ShareAlike license, unless stated otherwise. Cite this article:
Adams Morgan Facts for Kids. Kiddle Encyclopedia.