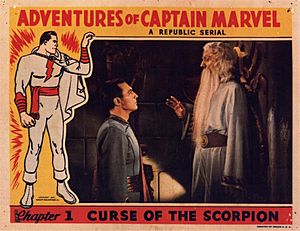 Adventures of Captain Marvel is a 12-chapter movie serial released in 1941 by RKO Radio Pictures. It was produced by Republic Studios. It stars Tom Tyler as Captain Marvel and Frank Coughlan, Jr. as Billy Batson. It was directed by William Witney and John English.

All content from Kiddle encyclopedia articles (including the article images and facts) can be freely used under Attribution-ShareAlike license, unless stated otherwise. Cite this article:
Adventures of Captain Marvel Facts for Kids. Kiddle Encyclopedia.