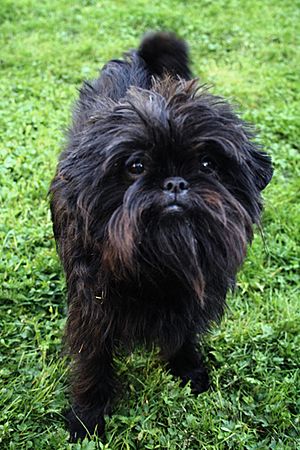 Affenpinscher is a small breed (type) of dog in the toy group. These dogs originally came from Germany and are known to have existed since the 1600s. Their name comes from the German word "Affe," which means "monkey," because their faces remind people of monkeys. Originally, the dog was bred to be a "ratter," a type of dog that kills rats and mice in homes, farms, and stables. Now that mice are not so commonly found in the home, Affenpinschers are usually just kept as pets.

The Affenpinscher is a very small kind of dog, weighing between 3kg and 6kg (6lbs to 13lbs) and standing between 23cm and 30cm (9 and 12 inches) at the shoulder. Their face is flat and "monkey-like." The most common and preferred colour of fur for this breed is black, but they can also come in grey, beige, and other colours. In the American Kennel Club, a good example of these dogs could be any colour; in the French and British Kennel Clubs they must only be black.

Even though Affenpinschers were bred to hunt mice, they do not like to chase other animals, so they can happily live with other pets. They are playful but very stubborn. These dogs can be difficult to train, because they do not like to listen to instructions and often become bored. Affenpinschers are somewhat territorial (protective) when it comes to their toys and food, so they are not recommended for homes with very small children.

This dog is mostly quiet, and does not bark much. It can become very excited if attacked, and shows no fear toward any aggressor.

A small study showed that these dogs live an average of 11.4 years, which is not very long for a small dog; small dogs usually live 14-15 years. One of their most common health problems is bladder disease, which happens most often when the dogs are older (8 years and up.) Their short faces can make it difficult for them to breathe and exercise in hot weather. Like many kinds of dogs, Affenpinschers often get a disease called hip dysplasia which makes it difficult for them to run or walk.

All content from Kiddle encyclopedia articles (including the article images and facts) can be freely used under Attribution-ShareAlike license, unless stated otherwise. Cite this article:
Affenpinscher Facts for Kids. Kiddle Encyclopedia.