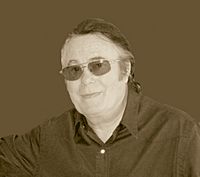 Alain Barrière (born Alain Bellec; 18 November 1935 – 18 December 2019) was a Breton-French pop singer. He was active from the 1950s until his death and was known for participating in the 1963 Eurovision Song Contest for his hit song "Elle était si jolie". Barrière was born in La Trinité-sur-Mer, Brittany, France.

Barrière died of cardiac arrest in Carnac, France on 18 December 2019 at the age of 84.

All content from Kiddle encyclopedia articles (including the article images and facts) can be freely used under Attribution-ShareAlike license, unless stated otherwise. Cite this article:
Alain Barrière Facts for Kids. Kiddle Encyclopedia.