The Alamosa Skatepark Envinronment, also known as West Side Skatepark, is the second in-ground large scale skatepark located in Albuquerque, New Mexico. It was commissioned to ARTIFEX Skatepark Environments in 2004. 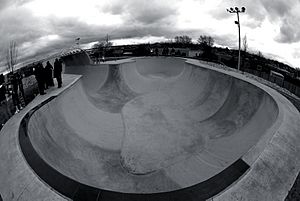 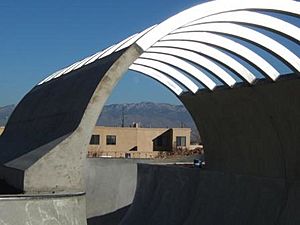 The skylight opening of the Skylit Bowl

The majority of the city's other existing skatepark is typical bowls with radiused transitions and limited streetscape elements. In order to provide a large variety of skate opportunities in the city, the Alamosa facility is designed more as a park to skate. It draws inspiration from Albuquerque's world-renowned arroyo system as well as site specific elements in the city that are now off-limits to skating. Various elements are incorporated in a cohesive site plan that reacts to current trends in the sport. Skating is shifting toward site and region specific parks that have more of a campus or civic plaza feel, and this facility is a unique response to this trend.

The skatepark has two distinct main areas, the Trenches and the Skylit Bowl. The Trenches is a unique flow area with a mix of banks, ledges, walls, stairs, gaps, and rails in various combinations and arrangements. The majority of the Trenches is poured-in-place concrete with a brick central plaza. The layout arrangement and concrete coloring of this area is inspired by Albuquerque's drainage arroyos and allows users to ride lines or session specific elements. The arrangement also disperses users throughout the park instead of congregating them in the middle. The entire area drains via surface flow which discharges through a replica arroyo section.

The Skylit Bowl combines three deep bowls with a ¾ pipe that has a large-scale skylight type opening on top (the first of its kind). This area of the park is inspired by the backyard pools that skaters rode in the early years of the sport. The bowls range in depth from 8' to 11' and incorporate various horizontal radii to facilitate rider circulation. The edges of the bowls are round steel pipe and granite pool edging.

The Trenches and the Skylit Bowl are oriented parallel to each other in an east-west alignment. This configuration fills the shape of the existing site as well as accommodating the natural west to east slope. The Skylit Bowl is situated on the high spot of the site to allow connection to the existing storm sewer system. The rim of the bowls is 7-10 feet above the Trenches, creating a sizeable mound.

Between these two areas is a sloped turf grass area for users to rest and still be able to watch the other riders. The mound of the Skylit Bowl also buffers noise from the Trenches to the adjacent properties to the north.

The skatepark has multiple entry points which further enhance the concept of a park to skate. Along the south side of the park, an existing pedestrian walk provides access to three entry points; an uphill sloped walk, a down-hill sloped ramp, and a set of stairs. Two rideable walks connect the Trenches to the Skylit Bowl, which is connected to a perimeter walk with a crusher fines path. These connections provide easy internal circulation and a sense of openness to the surrounding site. this is one of the best in New Mexico for vert but has some street skate spots in it

All content from Kiddle encyclopedia articles (including the article images and facts) can be freely used under Attribution-ShareAlike license, unless stated otherwise. Cite this article:
Alamosa Skatepark Environment Facts for Kids. Kiddle Encyclopedia.