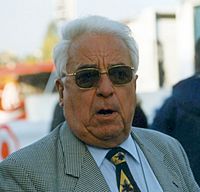 Albert Bouvet (28 February 1930 – 20 May 2017) was a French professional cyclist. He won Paris–Tours in 1956 and remained the last Frenchman to win until Jacky Durand won in 1998. His name is also associated with Paris–Roubaix, as an organiser and discoverer of new sections of pavé. He was born in Mellé, Ille-et-Vilaine.

All content from Kiddle encyclopedia articles (including the article images and facts) can be freely used under Attribution-ShareAlike license, unless stated otherwise. Cite this article:
Albert Bouvet Facts for Kids. Kiddle Encyclopedia.