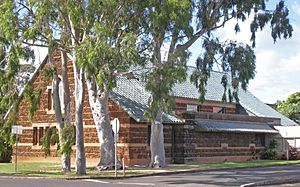 The Albert Spencer Wilcox Building was established as a library in 1924. and then converted to the Kauaʻi Museum. It has exhibits on the history of the island of Kauaʻi in Hawaii.

The first library on the island of Kauaʻi was probably established by Reverend John Mortimer Lydgate in 1900 at his church in Līhuʻe. After moving to a temporary home in 1921, a permanent home was needed. On February 3, 1922, Emma Kauikeolani Wilcox, widow of businessman and politician Albert Spencer Wilcox (1844–1919) offered US$75,000 for a public library on Kauaʻi. In October 1922 architect Hart Wood was selected to design the building named in honor of Wilcox. Built with John Hansen as general contractor, it opened in 1924 to house the first public library on the island.

In April 1954 a committee started raising funds for a museum to be built next to the library. Juliet Rice Wichman (1901–1987) was chair of the committee. A granddaughter of businessman and politician William Hyde Rice, she had married Frederick Warren Wichman after the death of her first husband Holbrook M. Goodale. The new building was designed by architect Kenneth Roehrig and named for Rice. Wichman became the museum's first director, and would later co-found the National Tropical Botanical Garden and donate land to become the Limahuli Garden and Preserve to the garden. The first manager of the museum was Dora Jane Isenberg Cole (1917–1988), a second cousin of Wichman sharing great-grandfather William Harrison Rice (1813–1862) but Paul Isenberg (1837–1903) as her paternal grandfather.

On December 3, 1960, the museum opened to the public in the Rice building. In 1969 the state of Hawaii built a new library building, and the Wilcox building was converted to house additional exhibits of the Kauaʻi Museum, opening in December 1970.

All content from Kiddle encyclopedia articles (including the article images and facts) can be freely used under Attribution-ShareAlike license, unless stated otherwise. Cite this article:
Albert Spencer Wilcox Building Facts for Kids. Kiddle Encyclopedia.