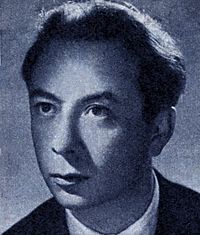 Alberto Zedda (2 January 1928 – 6 March 2017) was an Italian conductor and musicologist. He was known for his work relating to the 19th-century Italian repertoire. He was born in Milan.

Zedda studied the works of Antonio Vivaldi, George Frideric Handel, Gaetano Donizetti, Vincenzo Bellini, Giuseppe Verdi, and most notably Gioachino Rossini. He was known for his research on vocal ornamentation and his aim at authentic performing style.

All content from Kiddle encyclopedia articles (including the article images and facts) can be freely used under Attribution-ShareAlike license, unless stated otherwise. Cite this article:
Alberto Zedda Facts for Kids. Kiddle Encyclopedia.