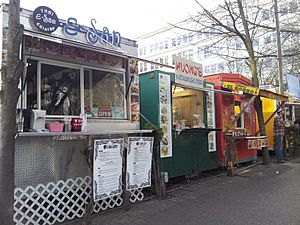 The pod was the city's largest, before closing in 2019 for construction of Block 216. In late 2019, Eater Portland's Brooke Jackson-Glidden wrote, "Earlier this year, the loss of one of Portland’s most notable food cart pods struck fear into the hearts of many local diners: The closure of the Alder Street food carts was seen as the potential death rattle of the city’s larger street food scene." Some of the carts relocated to Ankeny Square, a section of the North Park Blocks south of Burnside Street.

All content from Kiddle encyclopedia articles (including the article images and facts) can be freely used under Attribution-ShareAlike license, unless stated otherwise. Cite this article:
Alder Street food cart pod Facts for Kids. Kiddle Encyclopedia.