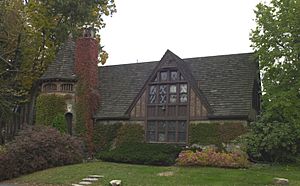 The Aldus Chapin Higgins House is a historic house at 1 John Wing Road, on the campus of the Worcester Polytechnic Institute, in Worcester, Massachusetts. Built in 1921, it is one of the city's finest examples of period Revival architecture, notably including antique elements imported from Europe. The house was listed on the National Register of Historic Places in 1980. It currently houses the college's alumni relations office and is used for special events.

The Aldus Chapin Higgins House is located northwest of downtown Worcester, on the north side of the Worcester Polytechnic Institute campus, overlooking Institute Park to the north. It is an eclectic structure 2-1/2 stories in height, with its exterior finished in stucco, brick, and stone. It consists of two roughly rectangular wings, set at right angles to each other and joined by a central octagonal entry. The octagonal tower is crowned by a crenellated battlement. The upper levels are generally finished in half-timbered stucco, in some places decorated by additional foliate carvings. Many of its leaded casement windows are antiques shipped from Europe, and the house's Great Hall has architectural features removed from an Italian monastery.

The house was designed by Grosvenor Atterbury, although Aldus Chapin Higgins, the owner, had likely made sketches and other design notes for some years before hiring Atterbury. Aldus Higgins was the son of Milton Prince Higgins, founder of the Norton Company and a leading figure in the Washburn and Moen Wire Works, a major local industry. The house was donated to the Worcester Polytechnic Institute after the death of Aldus Chapin Higgins' wife.

All content from Kiddle encyclopedia articles (including the article images and facts) can be freely used under Attribution-ShareAlike license, unless stated otherwise. Cite this article:
Aldus Chapin Higgins House Facts for Kids. Kiddle Encyclopedia.