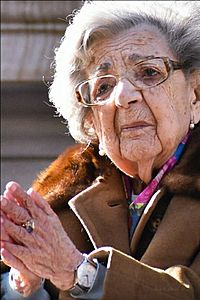 Alejandra Soler Gilabert (July 8, 1913 – March 1, 2017) was a Spanish politician and teacher. She also worked for the Diplomatic Academy of the Ministry of Foreign Affairs of the Russian Federation. She was born in Valencia, Spain. She took part in the revolts against Miguel Primo de Rivera's dictature and in 1934, she became a member of the communist party.

All content from Kiddle encyclopedia articles (including the article images and facts) can be freely used under Attribution-ShareAlike license, unless stated otherwise. Cite this article:
Alejandra Soler Facts for Kids. Kiddle Encyclopedia.