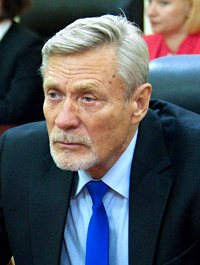 Aleksandr Yakovlevich Mikhailov (Russian: Александр Яковлевич Михайлов; born 4 October 1944) is a Soviet and Russian actor. He has appeared in 42 movies since 1973. He starred in the 1981 movie Muzhiki! which was in the 32nd Berlin International Film Festival.

Mikhailov was born in Olovyannaya, Russia. He studied at the Maly Theater.

All content from Kiddle encyclopedia articles (including the article images and facts) can be freely used under Attribution-ShareAlike license, unless stated otherwise. Cite this article:
Aleksandr Yakovlevich Mikhailov Facts for Kids. Kiddle Encyclopedia.