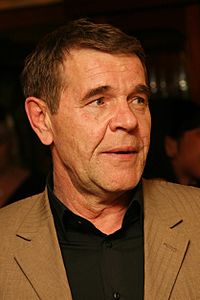 Aleksey Ivanovich Buldakov (Russian: Алексе́й Ива́нович Булдако́в; 26 March 1951 – 3 April 2019) was a Soviet and Russian movie actor. He is best known for his roles in movies such as The Guard (1990), Peculiarities of the National Hunt (1995) and Hitler Goes Kaput! (2008). He was named People's Artist of the Russian Federation in 2009. He was born in the Makarovka village of Klyuchevsky District, Altai Krai.

On 3 April 2019, Buldakov died of a blood clot in Ulaanbaatar, the capital city of Mongolia. He was 68.

All content from Kiddle encyclopedia articles (including the article images and facts) can be freely used under Attribution-ShareAlike license, unless stated otherwise. Cite this article:
Aleksey Buldakov Facts for Kids. Kiddle Encyclopedia.