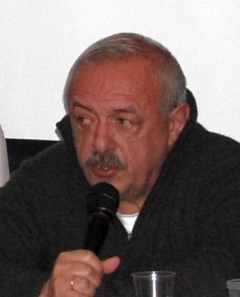 Alexander Ilyich Gutman (Russian: Алекса́ндр Ильи́ч Гу́тман; January 29, 1945 – February 17, 2016) was a Russian movie director of Jewish origin. His career began in 1986. Gutman made over 50 documentary movies, 13 of them as director. He won awards at several Russian and international movie festivals. His most famous movie is Journey Back to Youth.

Gutman was born in St. Petersburg. He graduated from the Leningrad Polytechnical Institute (now known as St. Petersburg State Polytechnic University) (1968) and VGIK (1978). Gutman died in Moscow on February 17, 2016 from heart failure. He was aged 71.

All content from Kiddle encyclopedia articles (including the article images and facts) can be freely used under Attribution-ShareAlike license, unless stated otherwise. Cite this article:
Alexander Gutman Facts for Kids. Kiddle Encyclopedia.