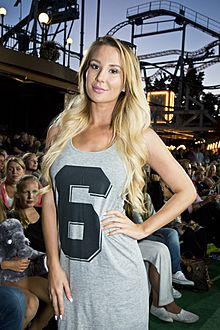 Alexandra "Kissie" Nilsson (born Alexandra Barbara Nilsson, 18 April 1991) is a Swedish blogger and television personality. She has two siblings, who are younger than her.

She started her blog in January 2007. In 2011, she had the most visited blog in Sweden with about 170,000 visitors. She also has a Youtube channel called Alexandra "Kissie" Nilsson. It has very many subscribers.

In late summer of 2010, Kissie tried to start a career in music by recording a song, called "Success". It was released a month later. However, the song didn't get very much attention, and most of her readers didn't buy the song. That caused the website that sold "Success" to shut down two weeks after it's publicity.

In autumn 2010, Kissie and her friend were traveling to a Swedish city called Västerås, where they were going to host DJ at a nightclub. She said on her blog that she would meet her readers at the train station, but when she got there, she was attacked by some readers who threw some eggs and flour at her.

All content from Kiddle encyclopedia articles (including the article images and facts) can be freely used under Attribution-ShareAlike license, unless stated otherwise. Cite this article:
Alexandra Nilsson Facts for Kids. Kiddle Encyclopedia.