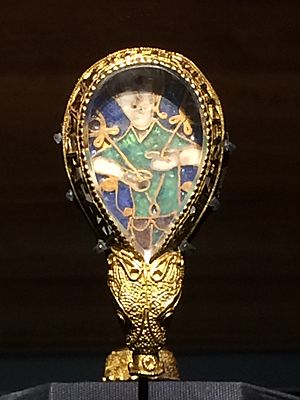 The Jewel viewed from the front, with the top in shadow

The Alfred Jewel is a small piece of Anglo-Saxon goldsmith's work made of enamel and quartz enclosed in gold. It was discovered in 1693, in North Petherton, Somerset, England, and is now one of the most popular exhibits at the Ashmolean Museum in Oxford. It is named after King Alfred, a famous king of the Anglo-Saxon kingdom of Wessex.

All content from Kiddle encyclopedia articles (including the article images and facts) can be freely used under Attribution-ShareAlike license, unless stated otherwise. Cite this article:
Alfred Jewel Facts for Kids. Kiddle Encyclopedia.