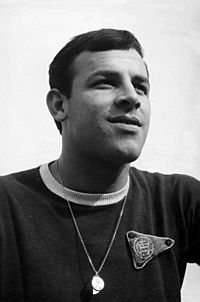 Alfredo Hugo "El Tanque" Rojas Delinge (born February 20, 1937) is a former professional Argentine football player. He was born in Lanús, Buenos Aires Province. Rojas started playing with Club Atlético Lanús in 1958, but his participation in the 1958 FIFA World Cup for the national team, made him more popular in Europe.

He joined Celta Vigo in mid-1959, but the club were relegated, Rojas moved on to play for Real Betis in 1959.

All content from Kiddle encyclopedia articles (including the article images and facts) can be freely used under Attribution-ShareAlike license, unless stated otherwise. Cite this article:
Alfredo Rojas Facts for Kids. Kiddle Encyclopedia.