Almost Naked Animals is a Canadian animated television series that was produced by 9 Story Entertainment for YTV. The series was created by Noah Z. Jones, who is also the creator of the Disney Channel animated series Fish Hooks. It was based upon an art website that Jones created in 2005. The series premiered on January 7, 2011 on YTV, and ended on May 22, 2013.

The cartoon is set inside a tropical resort called the Banana Cabana. All of the cabana's staff members and residents are funny animals who have shaved off their fur and wear only underclothes. An anthropomorphic dog named Howie is the manager and leader of the cabana. Each episode follows Howie and his "misfit" crew having unusual adventures in the Banana Cabana. 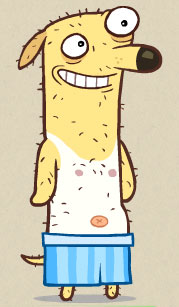 The Licensing Shop has signed products in the US market for Almost Naked Animals. Freeze has secured rights for t-shirts, fashion tops and hoodies in all sizes while ABG Accessories will be making cold weather accessories, spring and summer headwear and rainwear including umbrellas and slickers for the show. In 2012 Cafepress agreed to make Almost Naked Animals plushies, water bottles, tshirts, and more merchandise is being made.

In January 2012 it was announced that 9 Story and Game Pill were creating an Almost Naked Animals online game entitled "Cabana Craze." The game was released on September 25, 2012 and can be found at CabanaCraze.com.

All content from Kiddle encyclopedia articles (including the article images and facts) can be freely used under Attribution-ShareAlike license, unless stated otherwise. Cite this article:
Almost Naked Animals Facts for Kids. Kiddle Encyclopedia.