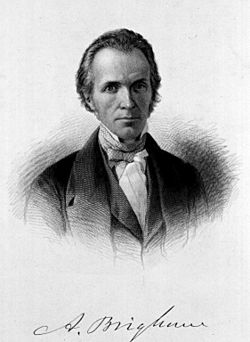 Amariah Brigham (December 26, 1798, in New Marlborough, Massachusetts – September 8, 1849, in Utica, New York) was an American psychiatrist and, in 1844, one of the founding members of the Association of Medical Superintendents of American Institutions for the Insane, which eventually became the American Psychiatric Association. While serving as the first director of the Utica Psychiatric Center, Dr. Brigham launched and became the first editor of the Association's official journal, The American Journal of Insanity (now called The American Journal of Psychiatry).

All content from Kiddle encyclopedia articles (including the article images and facts) can be freely used under Attribution-ShareAlike license, unless stated otherwise. Cite this article:
Amariah Brigham Facts for Kids. Kiddle Encyclopedia.