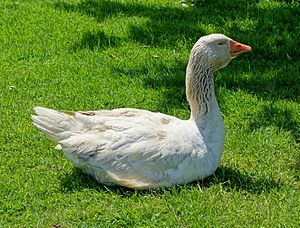 The American Buff goose is a breed of domestic goose native to the United States. It was first recognized by the American Poultry Association in 1947. The breed is named for its single color variety, which is an apricot or fawn hue rather than literally buff. They are medium-weight birds, with ganders averaging 18 pounds (8.2 kg) and geese 16.

Like most other domestic geese, it was developed from the greylag goose of Europe and Asia. Whether it was bred independently from a mutation with grey geese or from buff imported stock from Europe is unclear. It is a dual purpose bird used both for meat and egg production. They are mostly used by small farmers, and are known for their calm and docile disposition. The American Buff goose is extremely rare poultry breed, and listed as critical on the conservation priority list of the American Livestock Breeds Conservancy. They are also included in Slow Food USA's Ark of Taste, a catalog of heritage foods in danger of extinction.

All content from Kiddle encyclopedia articles (including the article images and facts) can be freely used under Attribution-ShareAlike license, unless stated otherwise. Cite this article:
American Buff goose Facts for Kids. Kiddle Encyclopedia.