The American Hairless Terrier is a rare breed of dog that was derived as a variant of the Rat Terrier. As of January 1, 2004, the United Kennel Club deemed the AHT a separate terrier breed, granting it full UKC recognition.

An intelligent, social and energetic working breed, the American Hairless Terrier is often listed as a potential good breed choice for allergy sufferers. 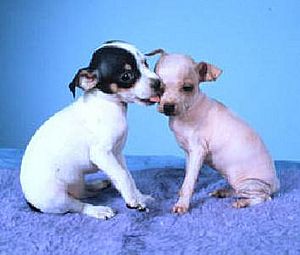 The American Hairless Terrier's American ancestry begins with the mixed breed terriers called Feists brought from Europe to North America as early as the 18th century. In the late 1800s the Rat Terrier breed was developed from the Feist by the addition of Beagle, Italian Greyhound and Miniature Pinscher bloodlines.

The distinct American Hairless Terrier breed began in 1972 when one hairless puppy named Josephine appeared in a Rat Terrier litter in the state of Louisiana, United States. Owners Edwin and Willie Scott liked the dog's look and temperament, and upon maturity bred her hoping to reproduce the hairless quality. They were eventually successful; a litter produced in 1981 provided the foundation stock of the breed. 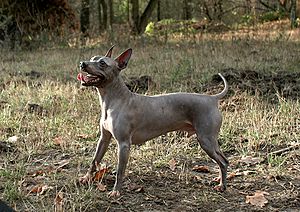 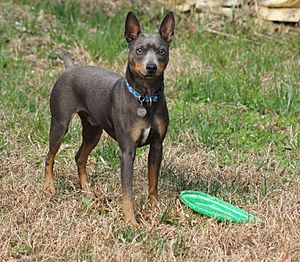 The American Hairless Terrier (AHT) is an intelligent, curious, and energetic breed.

Graceful and elegant, it is also strong and athletic and enjoys participating in agility games. This dog typically likes to dig, chase small animals and will bark when alarmed and will act as a good watch dog. The AHT is not a strong swimmer and should be monitored around water.

Its ancestry gives the AHT a strong hunting instinct, but its lack of coat makes it a less likely dog for a hunting, as rough underbrush may hurt the unprotected skin. As a breed founded by working dogs, the prey drive is strong in many AHTs. This has led to debate among owners as to whether or not they are appropriate for families with young children. 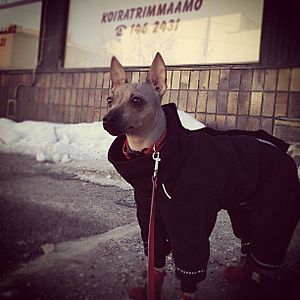 Due to their small size, they can be hurt if roughly handled. Positive reward is the most effective form of training, however, some require a more care-giver approach to correction in giving it direction.

Due to their lack of hair, they may need protection from the sun (based on the season, their geographic location and the individual dog's degree of pigmentation or lack thereof). If needed, sunscreen can be applied or a light shirt may be worn. Clothing is oftentimes used, not only for the protection from the sun but from the cold as well (where the climate warrants).

All content from Kiddle encyclopedia articles (including the article images and facts) can be freely used under Attribution-ShareAlike license, unless stated otherwise. Cite this article:
American Hairless Terrier Facts for Kids. Kiddle Encyclopedia.