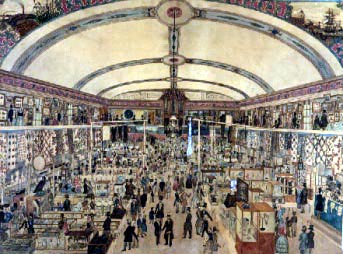 Image of Annual Fair of the American Institute at Niblo's Garden c. 1845 by Benjamin Johns Harrison

"At these fairs were displayed the finest products of agriculture and manufacturing, the newest types of machinery, the most recent contributions of inventive genius...[the fairs] served a two-fold purpose: that of playing the part of demonstrator to the public and that of furnishing an incentive to the exhibitors, both through competition and through the desire to win the very liberal awards and premiums."

All content from Kiddle encyclopedia articles (including the article images and facts) can be freely used under Attribution-ShareAlike license, unless stated otherwise. Cite this article:
American Institute Fair Facts for Kids. Kiddle Encyclopedia.