The Council offers both personal and commercial memberships which allow individual participants to have discussions and swap recipes with fellow pie lovers, while providing commercial members with business networking opportunities and promotional support. The APC has run the APC National Pie Championships since 1995. The event is usually held in Celebration, Florida. The competition is open to amateur, professional, and commercial bakers. As an example of typical categories, the categories at the 2014 competition were:

The APC also sponsors or promotes other pie-centric events throughout the year. The APC council also conducts surveys of pie consumption. APC research has shown that Apple is Americans' favorite pie, that 59% of Americans consider pie an appropriate late-night snack, and that 20% of Americans have eaten an entire pie. 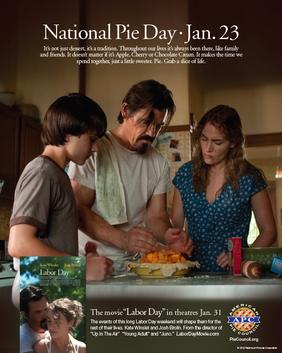 National Pie Day, which is held annually on January 23, is now sponsored by the APC since 1986. The holiday was started in the mid-1970s by Boulder, Colorado teacher Charlie Papazian after he declared his birthday to be National Pie Day. This should not be confused with Pi Day which the U.S. Congress recognizes as March 14.

In 2014, the APC partnered with Paramount Pictures in promoting the romantic thriller film Labor Day in conjunction with National Pie Day. (A pie-making scene features prominently in the film, and the film's general release was within a few days of National Pie Day.)

All content from Kiddle encyclopedia articles (including the article images and facts) can be freely used under Attribution-ShareAlike license, unless stated otherwise. Cite this article:
American Pie Council Facts for Kids. Kiddle Encyclopedia.