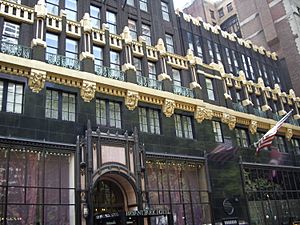 The building's form is based on Eliel Saarinen's unbuilt competition entry for the Tribune Tower, augmented with a strong use of color. The architects combined Gothic and modern styles in the design of the building. Black brick on the frontage of the building (symbolizing coal) was selected to give an idea of solidity and to give the building a solid mass. Other parts of the facade were covered in gold bricks (symbolizing fire), and the entry was decorated with marble and black mirrors. Howells and Hood employed the talents of their frequent collaborator Rene Paul Chambellan for the ornamentation and sculptures.

In 1988, successor company American Standard sold the building to a Japanese company. In 1998, the building was sold to Philip Pilevsky for $150 million. Three years afterwards, the American Radiator Building was converted into The Bryant Park Hotel with 130 rooms and a theater in the basement. The landmark status of the exterior required that the conversion pay special attention to the renovation of the facade decor, and prohibited proposed changes such as bigger guestroom windows.

All content from Kiddle encyclopedia articles (including the article images and facts) can be freely used under Attribution-ShareAlike license, unless stated otherwise. Cite this article:
American Radiator Building Facts for Kids. Kiddle Encyclopedia.