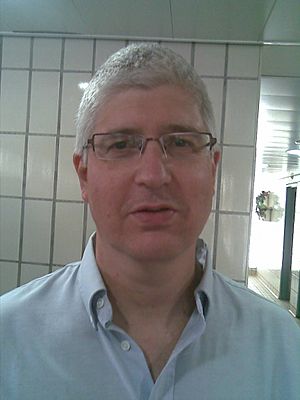 Amir Ganiel (January 6, 1963 – May 14, 2018) was an Israeli swimming champion and record holder in swimming. He was part of the in the World Championships in Berlin for the national team. He worked in long distance. He was called one of the greatest Israeli swimmers.

He became a surgeon after his swimming career.

Ganiel was born and died in Jerusalem.

All content from Kiddle encyclopedia articles (including the article images and facts) can be freely used under Attribution-ShareAlike license, unless stated otherwise. Cite this article:
Amir Ganiel Facts for Kids. Kiddle Encyclopedia.