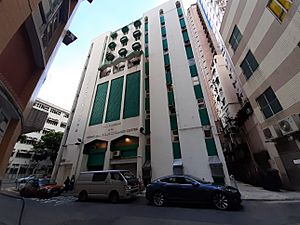 The Ammar Mosque and Osman Ramju Sadick Islamic Centre (Chinese: 愛群清真寺林士德伊斯蘭中心) or Wan Chai Mosque is a mosque and Islamic center in Hong Kong, People's Republic of China. It is the third mosque in Hong Kong. The original building of the mosque was built in 1967.

The original building of the mosque was a small mosque besides a cemetery at 7 Seymore Street. In 1978, the mosque was relocated to a new place at Oi Kwan Road because the land was needed by the government to construct Aberdeen tunnel. The new mosque building was reopened on September 1981.

The mosque is the headquarter place for Incorporated Trustees of the Islamic Community Fund of Hong Kong (the main Islamic organization in Hong Kong) and the Hong Kong Islamic Youth Association.

All content from Kiddle encyclopedia articles (including the article images and facts) can be freely used under Attribution-ShareAlike license, unless stated otherwise. Cite this article:
Ammar Mosque and Osman Ramju Sadick Islamic Centre Facts for Kids. Kiddle Encyclopedia.