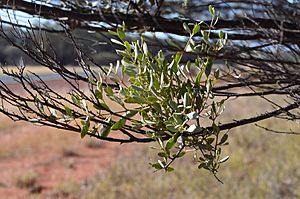 A. maidenii on mulga (Acacia aneura) 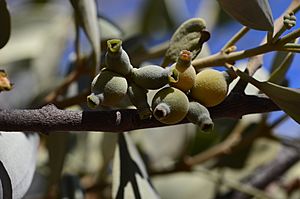 Amyema maidenii is a species of flowering plant within the genus Amyema, an epiphytic hemiparasitic plant of the family Loranthaceae native to Australia and found Australia-wide in the inland (but not in Victoria nor Tasmania).

Its inflorescence is composed of two opposite triads, with the all the flowers being sessile. The leaves are flat.

A. maidenii is found on Acacias.

The earliest record in an Australian herbarium is MEL 22373491, which was collected in 1860 by Hermann Beckler on the Scropes Range (about 57 km north of Menindee) during the Victorian Exploring expedition. It was first described by Blakely in 1922 as Loranthus maidenii, but in 1962 was placed in the genus Amyema by Barlow.

All content from Kiddle encyclopedia articles (including the article images and facts) can be freely used under Attribution-ShareAlike license, unless stated otherwise. Cite this article:
Amyema maidenii Facts for Kids. Kiddle Encyclopedia.