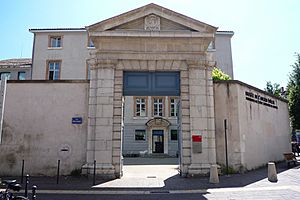 The Ancien Évêché Museum is a departmental museum in Grenoble. It is dedicated to the Isere heritage through the history of its Bishop's palace. It was inaugurated in 1998. It is in the former Bishop's palace, near the Notre-Dame cathedral. The museum gives access to the remains of an early Christian baptistry and to a section of the former Roman wall, in the basement of the building.

The permanent exhibition Isère throught History displays items and paintings relating to the development of Isère from pre-history to the present day.

The B tramline: Notre-Dame-Musée station.

All content from Kiddle encyclopedia articles (including the article images and facts) can be freely used under Attribution-ShareAlike license, unless stated otherwise. Cite this article:
Ancien Évêché Museum Facts for Kids. Kiddle Encyclopedia.