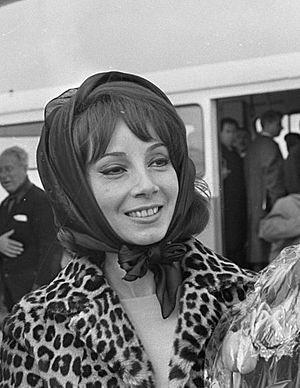 Andrée Marcelle Henriette Parisy (4 December 1935 – 27 April 2014), better known by her stage names Andréa Parisy and sometimes Andrée Parizy, was a French actress. She is best known for her roles in movies such as Babes a GoGo (1956), The Little Bather (1968) and Mayerling (1968). She was born in Levallois-Perret.

All content from Kiddle encyclopedia articles (including the article images and facts) can be freely used under Attribution-ShareAlike license, unless stated otherwise. Cite this article:
Andréa Parisy Facts for Kids. Kiddle Encyclopedia.