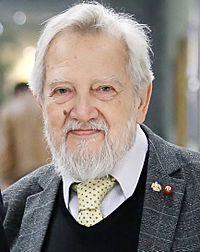 Andrej Andreevich Zolotov (born 13 December 1937) is a Russian screenwriter and music and art critic. He has written over 30 documentaries about Russian musicians, composers and conductors. He is the vice president of the Russian Academy of Arts.

He was born in Moscow. He wrote the scripts for Komsomolskaya Pravda and the TV series Vremya. He was Assistant Minister of Culture between 1990 and 1992. He became the chief editor of RIA Novosti in 1994.

All content from Kiddle encyclopedia articles (including the article images and facts) can be freely used under Attribution-ShareAlike license, unless stated otherwise. Cite this article:
Andrej Andreevich Zolotov Facts for Kids. Kiddle Encyclopedia.