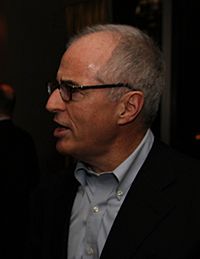 Andrew John Heyward is an independent media consultant in Manhattan, New York. Heyward is a principal in MarketspaceNext LLC and in his own practice, Heyward Advisory LLC. He is a senior advisor to Monitor Deloitte. He was formerly president of CBS News from January 1996 to November 2005. Before that he was an executive producer for the CBS Evening News (October 1994-January 1996). He has won 12 national Emmy Awards.

All content from Kiddle encyclopedia articles (including the article images and facts) can be freely used under Attribution-ShareAlike license, unless stated otherwise. Cite this article:
Andrew Heyward Facts for Kids. Kiddle Encyclopedia.