This large heavily-built, wolf-like, mammal lived during the Eocene, about 45 to 36 million years ago. It walked on four short legs and had a long body, a long tail, and feet with hoofed toes. It had a long snout with large, sharp teeth and flat cheek teeth that may have been used to crush bones.

Because Andrewsarchus is only known from a skull and a few other bones, whether it was an active predator or merely a large scavenger is open to debate, as is its exact time range. 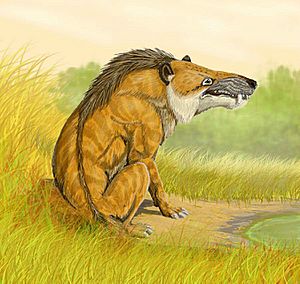 Reconstruction of A. mongoliensis

All content from Kiddle encyclopedia articles (including the article images and facts) can be freely used under Attribution-ShareAlike license, unless stated otherwise. Cite this article:
Andrewsarchus Facts for Kids. Kiddle Encyclopedia.