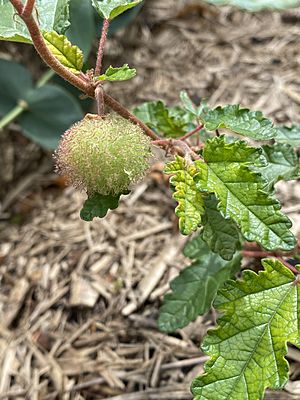 Androcalva rosea, commonly known as Sandy Hollow commersonia, is a small endangered shrub with pink flowers and prostrate trailing branches. It is only known from four locations in the Hunter Valley of New South Wales.

Sandy Hollow commersonia was first formally described in 2004 by Stephen Andrew Bell and Lachlan Mackenzie Copeland and given the name Commersonia rosea and the description published in Telopea from specimens collected at Sandy Hollow. In 2011 Barbara Ann Whitlock and Carolyn F. Wilkins changed the name to Androcalva rosea and published the change in Australian Systematic Botany. The specific epithet (rosea) is from the Latin rosaceus meaning "rosy".

The species is only known from four areas all within an 8 kilometre radius of Sandy Hollow district of the upper Hunter Valley. It grows in scrubland and heath vegetation on poor sandy soils.

Androcalva rosea is listed as "endangered" under the Australian Government Environment Protection and Biodiversity Conservation Act 1999 under the name Commersonia rosea and the New South Wales Government Biodiversity Conservation Act 2016. The main threats to the species include land clearance, inappropriate fire regimes, browsing by goats and rabbits and prolonged drought.

All content from Kiddle encyclopedia articles (including the article images and facts) can be freely used under Attribution-ShareAlike license, unless stated otherwise. Cite this article:
Androcalva rosea Facts for Kids. Kiddle Encyclopedia.