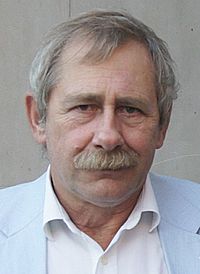 Andrzej Tadeusz Strzelecki (4 February 1952 – 17 July 2020), was a Polish actor, satirist, theatre director and screenwriter. He was the rector of the Aleksander Zelwerowicz National Academy of Dramatic Art in Warsaw in the years 2008 to 2016. He was born in Warsaw. His best known roles were in Klan, Battle of Warsaw 1920 and Barwy szczęścia.

All content from Kiddle encyclopedia articles (including the article images and facts) can be freely used under Attribution-ShareAlike license, unless stated otherwise. Cite this article:
Andrzej Strzelecki Facts for Kids. Kiddle Encyclopedia.