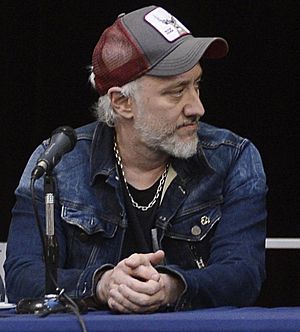 He was considered as a possible main actor of the 2012 comedy Graduados, but the role was finally taken by Daniel Hendler. However, he took part in it, in a guest appearance.

He got the 1998 Martín Fierro Award as journalist host, and the 2005 Clarín Award for his radio show "Perros de la calle".

All content from Kiddle encyclopedia articles (including the article images and facts) can be freely used under Attribution-ShareAlike license, unless stated otherwise. Cite this article:
Andy Kusnetzoff Facts for Kids. Kiddle Encyclopedia.