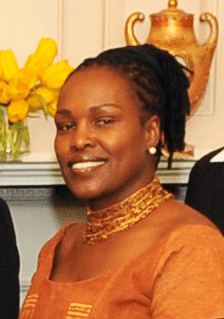 Ann Njogu is a lawyer and activist from Kenya. In 2010, she received the International Women of Courage Award.

In 2007, Njogu wanted a review of the salaries of the members of parliament. Kenya is very poor, but the members of parliament received a lot of money. The police attacked Njogu and took her to jail. Njoogu and the others who were arrested filed a Constitutional reference. It was called "Ann Njogu and others versus the State." It said the police could not keep a Kenyan citizen in jail for more than 24 hours.

In 2008, Njokgu helped to start the Civil Society Congress. This group worked for better government after the 2007 Kenyan election. In 2008 Njogu said there might be corruption in the sale of the Grand Regency Hotel. The police arrested Njokgu and they beat her.

Njogu received a 2010 International Women of Courage Award from the U.S. Department of State.

All content from Kiddle encyclopedia articles (including the article images and facts) can be freely used under Attribution-ShareAlike license, unless stated otherwise. Cite this article:
Ann Njogu Facts for Kids. Kiddle Encyclopedia.