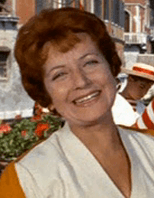 Anna Campori (22 September 1917 – 19 January 2018) was an Italian actress. Beginning her career in 1951, she appeared in 70 movies. She was born in Rome, Italy. She made her last appearance in the TV series Carabinieri.

All content from Kiddle encyclopedia articles (including the article images and facts) can be freely used under Attribution-ShareAlike license, unless stated otherwise. Cite this article:
Anna Campori Facts for Kids. Kiddle Encyclopedia.