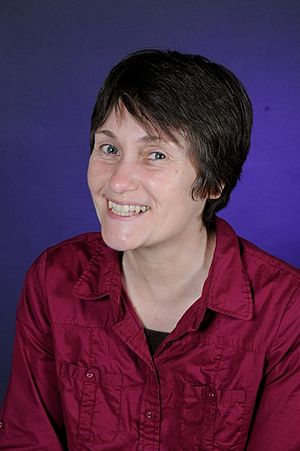 She was born in Saint-Basile and received a bachelor's degree in visual arts from the Université de Moncton. She attended animation workshops with the National Film Board of Canada and directed her first animated film Les joies de Noël in 1985.

In 1995, she published her first children's book Le Petit Chaperon Mauve. That was followed by Rose Neige et les six nains in 2000. Sirois has also illustrated story books and textbooks.

Sirois has created a number of sculptures which incorporate irons. These sculptures have been exhibited at various galleries in New Brunswick, Quebec and Ontario. In 2010, she published an art book Pourquoi 100 fers.

All content from Kiddle encyclopedia articles (including the article images and facts) can be freely used under Attribution-ShareAlike license, unless stated otherwise. Cite this article:
Anne-Marie Sirois Facts for Kids. Kiddle Encyclopedia.