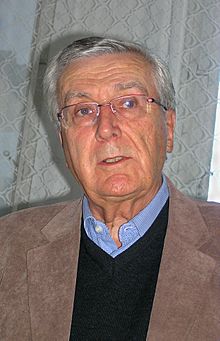 Antonín Přidal (13 October 1935 – 7 February 2017) was a Czech translator and writer. He translated works from English, Spanish and French to Czech. He was also a journalist and university lecturer. He was born in Prostějov, Czechoslovakia.

He worked at the Janáček Academy of Music and Performing Arts since 1991. In 1998, he received the Prize of Ferdinand Peroutka. His most notable works include Všechny moje hlasy (1967) and Sudičky (1968).

All content from Kiddle encyclopedia articles (including the article images and facts) can be freely used under Attribution-ShareAlike license, unless stated otherwise. Cite this article:
Antonín Přidal Facts for Kids. Kiddle Encyclopedia.