Ilex glabra, also known as Appalachian tea, dye-leaves, evergreen winterberry, gallberry, and inkberry, is a species of evergreen holly native to the coastal plain of eastern North America, from coastal Nova Scotia to Florida and west to Louisiana where it is most commonly found in sandy woods and peripheries of swamps and bogs. Ilex glabra is often found in landscapes of the middle and lower East Coast of the United States. It typically matures to 5–8 ft (1.5–2.4 m) tall, and can spread by root suckers to form colonies. It normally is cultivated as an evergreen shrub in USDA zones 6 to 10.

Gallberry nectar is the source of a pleasant honey that is popular in the southern United States. 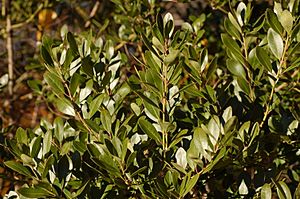 Gallberry honey is a highly rated honey that results from bees feeding on inkberry flowers. This honey is locally produced in certain parts of the Southeastern U. S. in areas where beekeepers release bees from late April to early June to coincide with inkberry flowering time.

Dried and roasted inkberry leaves were first used by Native Americans to brew a black tea-like drink, hence the sometimes used common name of Appalachian tea for this shrub.

All content from Kiddle encyclopedia articles (including the article images and facts) can be freely used under Attribution-ShareAlike license, unless stated otherwise. Cite this article:
Appalachian tea Facts for Kids. Kiddle Encyclopedia.