Aptostichus bonoi, or Bono's Joshua Tree trapdoor spider, is a morphological species of Euctenizidae spiders, nocturnal arthropods who seize their prey after leaping out of their burrows and inject it with venom. The species was found in Joshua Tree National Park, California, and described by the Auburn University professor Jason Bond in 2012. Only seven species of Aptostichus were known prior to 2012, including the Angelina Jolie trapdoor spider.

The species was named after the Irish rock band U2's singer Bono in honor of the band's 1987 album The Joshua Tree. 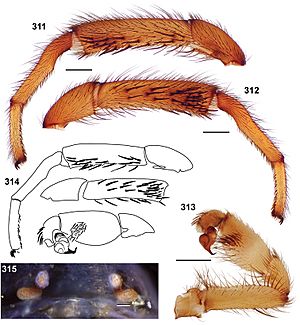 Aptostichus bonoi was described on the basis of only one male and one female type specimen; the male is the holotype and is presumed to have been collected from a pitfall trap, while the female is the paratype and was presumably caught live in her burrow. The species is known only from an area of Joshua Tree National Park called Covington Flat, which is the type locality. The available data is very limited, but it is assumed that males disperse to look for females from late fall until early winter.

Due to the very limited range of the species and its scarceness in collections, it is probable that Bono's Joshua Tree trapdoor spider is endangered in terms of its conservation status. According to Bond, the protection of the species is critical.

All content from Kiddle encyclopedia articles (including the article images and facts) can be freely used under Attribution-ShareAlike license, unless stated otherwise. Cite this article:
Aptostichus bonoi Facts for Kids. Kiddle Encyclopedia.