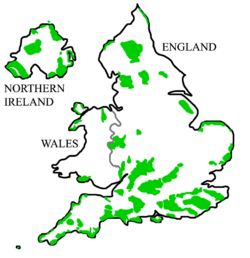 A map of all AONBs

The chief purpose of the AONB designation is to conserve and enhance the natural beauty of the landscape, with two secondary aims: meeting the need for quiet enjoyment of the countryside and having regard for the interests of those who live and work there. To achieve these aims, AONBs rely on planning controls and practical countryside management.

As they have the same landscape quality, AONBs may be compared to the national parks of England and Wales. AONBs are created under the same legislation as the national parks, the National Parks and Access to the Countryside Act 1949. Unlike AONBs, national parks have their own authorities, have special legal powers to prevent unsympathetic development, and are well known to many inhabitants of England, Wales and Northern Ireland.

There are 35 AONBs in England, four in Wales, one (Wye Valley) that is in both England and Wales and nine in Northern Ireland. The first AONB was awarded in 1956 to the Gower Peninsula, south Wales. The most recently confirmed is the Tamar Valley AONB in 1994. The smallest AONB is the Isles of Scilly (1976), 16 km2 (6.2 sq mi), and the largest AONB is the Cotswolds (1966), 2,038 km2 (787 sq mi). The AONBs of England and Wales together cover around 18% of the countryside in the two countries.

All content from Kiddle encyclopedia articles (including the article images and facts) can be freely used under Attribution-ShareAlike license, unless stated otherwise. Cite this article:
Area of Outstanding Natural Beauty Facts for Kids. Kiddle Encyclopedia.