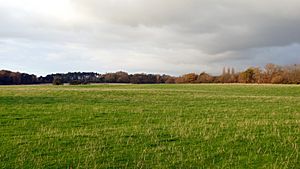 View from Aughton, looking towards Argleton.

Argleton is a place name of a village that does not really exist. It is a phantom settlement that was shown on Google Maps. It was located in the parish of Aughton, Lancashire. An employee of Edge Hill University noticed this in 2008, and could show that at the location, there are only empty fields.

All content from Kiddle encyclopedia articles (including the article images and facts) can be freely used under Attribution-ShareAlike license, unless stated otherwise. Cite this article:
Argleton Facts for Kids. Kiddle Encyclopedia.