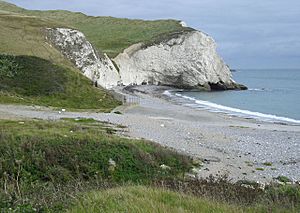 Arish Mell from the west

Arish Mell is a small embayment and beach between Mupe and Worbarrow Bays in Dorset, England and is part of the Jurassic Coast and the South West Coast Path passes just to the north. It is about 1 mile (1.6 km) due south of Lulworth Castle and East Lulworth. The bay is relatively inaccessible because it is within the Lulworth Ranges, an Army tank firing range, and although the Range Walks are open at most weekends and public holidays, there is no public access to the beach and cliffs.

Arish Mell was the site of a series discharges pipes carrying effluent from the Winfrith Nuclear Power Station into the sea.

Arish Mell forms a break in the line of chalk hills that form the Purbeck Ridge.

All content from Kiddle encyclopedia articles (including the article images and facts) can be freely used under Attribution-ShareAlike license, unless stated otherwise. Cite this article:
Arish Mell Facts for Kids. Kiddle Encyclopedia.