Official logo for Arizona Theatre Company between 2012 and 2015.

Arizona Theatre Company is a professional regional theatre company operating in both Tucson and Phoenix, Arizona. It performs a season of six productions at two theatres—the only League of Resident Theatres member to do so—at the Temple of Music and Art in Tucson and the Herberger Theater Center in Phoenix.

Arizona Theatre Company (ATC) was founded by Sandy Rosenthal in 1967 as the Arizona Civic Theatre. It originally performed in the basement of the old Santa Rita Hotel in Tucson. In 1972, the company achieved full professional status and became a member of the League of Resident Theatres (LORT).

The Arizona Civic Theatre began presenting a portion of its season in Phoenix in 1978, and a year later, the name was changed to Arizona Theatre Company. 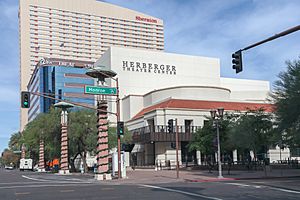 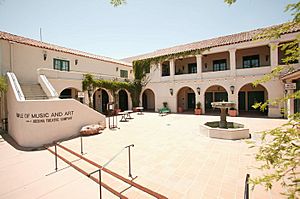 Temple of Music and Art in Tucson, AZ

ATC has been performing full seasons in both Tucson and Phoenix since 1983. It has produced more than 280 plays in its decades-long history, with an emphasis on producing varied seasons including European and American classics, musicals, and world- and Arizona-premiere productions.

Arizona Theatre Company is actively involved in numerous educational and community engagement programs in its various communities in an effort to increase public awareness of ATC and cultivate current and future audience interest and support.

All content from Kiddle encyclopedia articles (including the article images and facts) can be freely used under Attribution-ShareAlike license, unless stated otherwise. Cite this article:
Arizona Theatre Company Facts for Kids. Kiddle Encyclopedia.