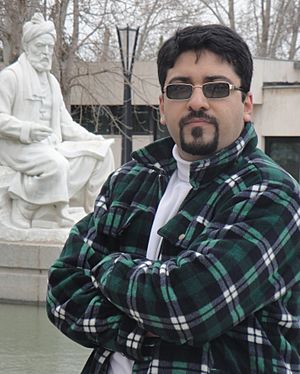 Arman Arian beside the tomb of Ferdowsi, 2012.

Arman Arian (born 1 September 1981) (Persian: آرمان آرین) is an Iranian author, novelist and researcher, best known for his first trilogy, Persians and I (Persian: پارسیان و من: کاخ اژدها). He is the youngest winner of the annual “The Book of The Year of Iran”. In addition to many national awards, he received the honorary diploma in the 31st IBBY World Congress in Copenhagen, Denmark (2008) by the International Board on Books for Young People the highest recognition available to creators of children's books. Although Arian is known as a children and young adults fantasy writer, he doesn't limit his genre to fantasy and also, his books are well received by wide range of readers from all age groups. Persians and I became the best-selling novel in the 19th Tehran International Book Fair, 2006.

In his writings, Arman Arian has combined an affluent academic background in Cinema studies with an extensive knowledge of myths, religions and history.“We need to look back to our cultural heritage to survive in the intricate modern life”, says this Iranian young author in an interview with Borna News in order to explain his intention to dig into Iranian ancient literature, history, mythical and epical stories.

All content from Kiddle encyclopedia articles (including the article images and facts) can be freely used under Attribution-ShareAlike license, unless stated otherwise. Cite this article:
Arman Arian Facts for Kids. Kiddle Encyclopedia.