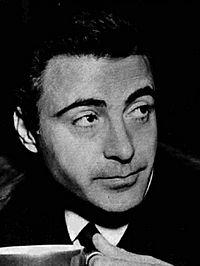 Armando Francioli (October 21, 1919 – April 6, 2020) was an Italian actor. He appeared in more than fifty movies, beginning in 1942. Francioli was born in Rome. His best known roles were in The Pharaohs' Woman, The Opium Den and in Hawk of the Caribbean.

All content from Kiddle encyclopedia articles (including the article images and facts) can be freely used under Attribution-ShareAlike license, unless stated otherwise. Cite this article:
Armando Francioli Facts for Kids. Kiddle Encyclopedia.