Armstrong's Point (informally referred to as The Gates) is a neighbourhood in Winnipeg, Manitoba. It is located in the West End of the city and in a large bend in the Assiniboine River. The land was developed in the late 19th and early 20th centuries as a residential district.

The Hudson's Bay Company deeded the land to Joseph Hill who arrived at Red River of the North in 1849 with a Pensioner Regiment. The area was originally called Point-a-Peltier. In 1854, returning to England, Hill put James Armstrong (1790-1874) in charge of the property. Hearing of Hill's death, the property was sold to Francis Evans Cornish, the first mayor of Winnipeg. In the early 1880s, Hill returned to Winnipeg, and reestablished his ownership of the land before selling it to a speculators' syndicate in April 1881 for $28,000. The speculators renamed the area Victoria Place, though officially it was known as Registered Plan 119. 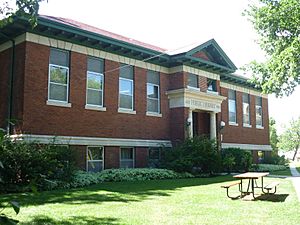 The Cornish Library, a local branch of the Winnipeg Public Library

During the period of 1880 through 1920, houses were built on its four roads, Cornish Avenue, East Gate, West Gate, and Middle Gate. The first home was completed in 1882.

Some of the buildings in Armstrong's Point that are historically significant are:

The Gates at East Gate, West Gate, Middle Gate, were designed by the architect Lt. Col. Henry Norland Ruttan in 1911, and built in the same year. Flanking three entrances to the Winnipeg neighbourhood, they are nearly identical construction, built of stone and wrought-iron, and of Classical Revival style. Funded by residents and built by the city's engineering department, the Gates are unique, having been built by the property owners instead of a real estate developer.

The 2016 population of the neighbourhood was 370 people. The median household income in Armstrong's Point was $59,421.

All content from Kiddle encyclopedia articles (including the article images and facts) can be freely used under Attribution-ShareAlike license, unless stated otherwise. Cite this article:
Armstrong's Point Facts for Kids. Kiddle Encyclopedia.