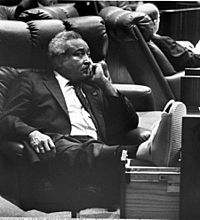 Arnett Elysus Girardeau Sr. (July 15, 1929 – October 26, 2017) was an American dentist, civil rights activist and former politician in the state of Florida. He was born in Jacksonville, Florida. He was a member of the Democratic Party. He was a member of the Florida House of Representatives from the 16th distrist from 1976 to 1982. He then served in the Florida Senate from 1983 through 1992.

All content from Kiddle encyclopedia articles (including the article images and facts) can be freely used under Attribution-ShareAlike license, unless stated otherwise. Cite this article:
Arnett E. Girardeau Facts for Kids. Kiddle Encyclopedia.